Hi! I’m Emily and while baking and blending is most definitely not my forte, I really enjoy testing out new recipes (and often laughing off the questionable batches), particularly vegan dishes! Lately, I’ve been exploring Forks Over Knives, a resource for plant-based recipes. As part of SEA’s special Halloween issue, I decided to try making Chef AJ’s Almost Instant Vegan Pumpkin Pudding. It looks glorious (below is the picture they put on their website), but what really caught my eye at first was the chia seeds in the recipe – I am in love with the smooth texture of chia seed pudding so I knew I had to try putting a fall-themed spin on it!

Rich, sweet pumpkin laced with almond milk, creamy chia seeds, and cinnamon spice for a kick! I was delighted to make it. This recipe only produces around four servings, and I knew I wanted to double that amount. I didn’t account for the very limited size of my blender though, which put a damper on my progress as you’ll soon find out!

You’ll need pumpkin spice for this recipe, which is typically a blend of several spices including nutmeg, cloves and cinnamon. You can buy the mix at your local grocery store, but I found it a lot cheaper to just grind and mix the spices I had available at home.

I used this recipe from My Baking Addiction for the pumpkin pie spice mix. I could already find everything I needed in my pantry, except for the ground ginger which I ended up leaving out.

I found many of the other ingredients to be pretty similar to the overnight oats I used to make (banana, plant-based milk, chia seeds), but the blending aspect was new to me! For overnight oats, you’d just give everything a good mix as Honeysuckle would say. I’ve mostly just blended smoothies and green juice in the past where I guesstimated the amounts. But since it was my first time making this pudding, I knew I wanted to be exact so I carefully measured out my ingredients for the most part, then doubled them… and this is where things went wrong.

My blender is pretty regular-sized, and as I later realized, was only going to comfortably house the 4-serving portion of ingredients. Me being the oblivious one, I nevertheless kept adding double the quantity of everything into the blender until it was literally about to overflow!

But first, here are some of the ingredients I bought:

I sadly have not gone to any pumpkin patches yet so I had to settle for this can from QFC!

What’s also interesting about this recipe is that it doesn’t call for sugar or honey or one of those traditional sweeteners; Chef AJ calls for pitted dates to be blended into the mix. I went to Costco and ended up using these nice dried deglet noor dates since I couldn’t find fresh ones and since the recipe never specified, I’m still not entirely sure whether they were supposed to be fresh or dried. Oh well!

Here’s what the accumulation of ingredients looked like with every step:

The original recipe calls for one banana and two cups of pumpkin so naturally I doubled that and told myself it was fine that my blender was already almost full when I still had most of my ingredients left to add in!

Next came the spice mix that I ground up (cinnamon, cloves, allspice, nutmeg)

I also decided to add the ingredients in order of how they appeared on the online recipe (except for the almond milk) so my dates ended up closer to the top of the blender. Given that they are the toughest to blend out of all the ingredients, it’s probably safe to say that wasn’t a good idea at all. So one thing I suggest is to add your dates and almond milk to your blender first! Before anything else! Since banana and pumpkin are both pretty soft foods and you don’t have to worry about them as much.

I was really surprised by how much vanilla extract was required (2 tablespoons total for double the recipe?!) and I may or may not have ran out of vanilla extract afterwards…I feel like you could honestly eyeball this ingredient though and even half as much can still go a long way.

This amount of stuff in this order is the perfect example of what NOT to do!

And finally, the almond milk! The double recipe calls for two cups but since it already looked like this after I added cup #1, I thought it wiser to hold off on adding the second cup until some of my pudding had blended down.

For those of you who are asking why I hadn’t added chia seeds yet, it’s because you’re supposed to blend the pudding first then essentially use the blender to incorporate the chia seeds into the mix without grinding them apart.

The ingredients are beginning to work their way down… but my dates were still pretty much still floating on top whole.

Me trying to use wooden chopsticks to somehow push the mass of dates to the bottom without splintering the wood in the blender blades!

After it blended down a bit, I added the rest of the almond milk in two parts to avoid overflow (oops!) You can still see little dark flecks of date which I had a lot of trouble blending.

Top-down pic of the pudding blend

As the blender threatened to overflow, I had to transfer nearly half the mix into a separate bowl as pictured. There were still bite-sized pieces of date near the top so they ended up in this bowl!

Even with half the mixture out, I was having a hard time getting my pudding into the vortex rhythm so I kept adding in almond milk to gradually thin the consistency. (Don’t worry – there’s still plenty of time for your pudding to condense in the fridge!)

Chia seeds come in next! I was surprised that I had to add so many (6 tablespoons?) but later they felt like just the right amount. They will blend in layers so you definitely have to be patient and stop the blender frequently to manually fold the seeds into the pudding with a spoon.

The picture below is actually how my pudding looked the next day (I left some of it in the blender), but you can see how the chia seeds are mixed in much more evenly.

After a bunch of repetitive blending, stirring, and a few extra dollops of almond milk, my pudding was finally ready to be scooped into cups and covered with saran wrap. The tray pictured above went into the fridge to condense overnight.

And voila! This was the beautiful result. 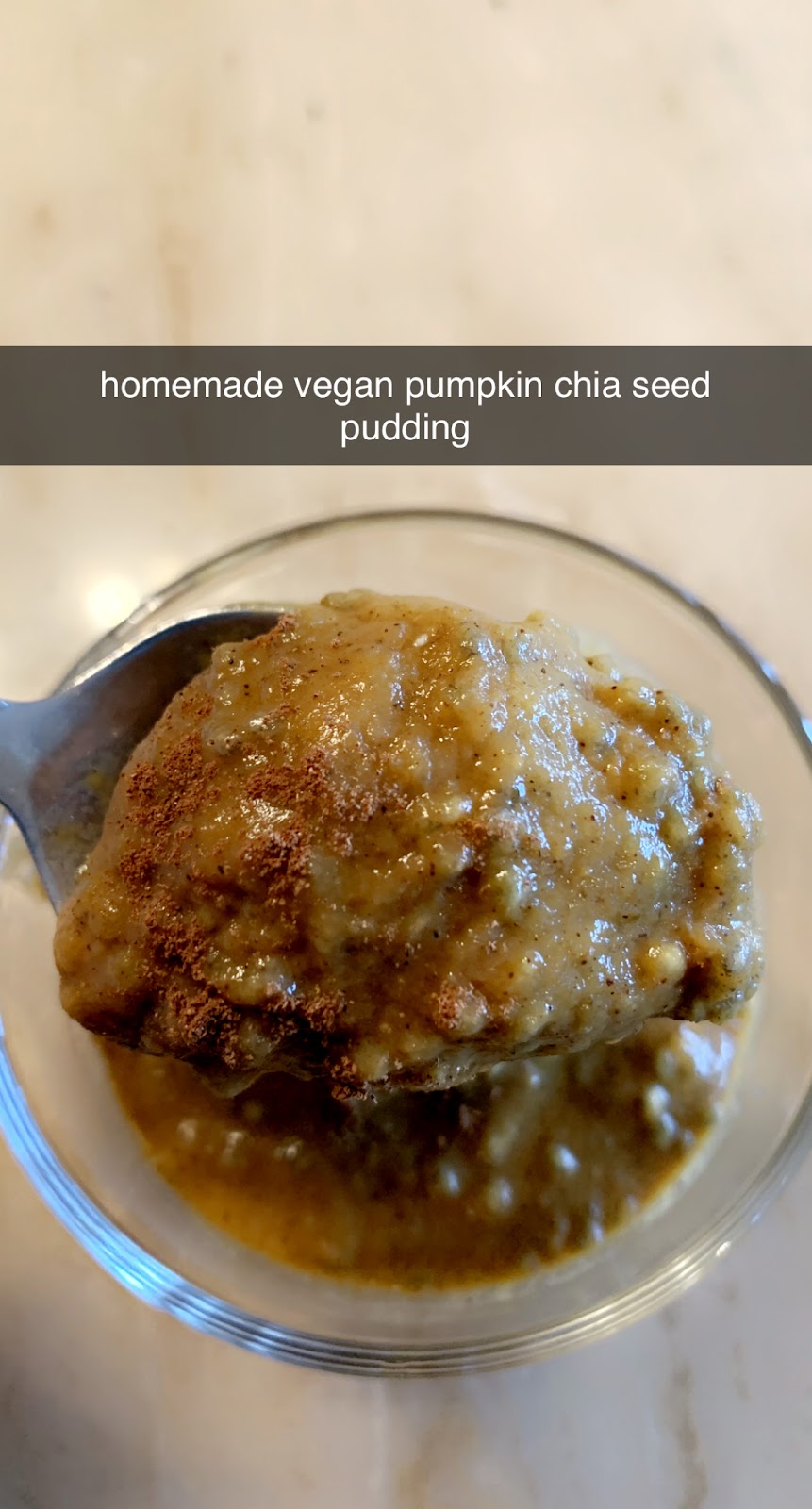 I sprinkled a dash of cinnamon on top and spooned a bite. The chia seeds were glossy and refreshing and the pudding didn’t have the gritty texture of overnight oats, but a light consistency reminiscent of mousse. There’s definitely a tartness from the banana-pumpkin blend and vanilla extract, but it’s far from overpowering and it meshes well with the spices. I couldn’t detect any trace of the dates, but I think it’s safe to say they added some sweetness to the mix.

Even my mom, who hasn’t been a fan of my cooking for the most part, enjoyed the pudding so I call it a success!

I brought several cups of pudding to cross country practice where my teammates Louis Drean and Rachelle Cormier, who is vegan, were glad to try some. “It was super good! It kind of reminded me of applesauce but with pumpkin and cinnamon – really gave me fall vibes!” Rachelle messaged me later.

I’m going to rate this pumpkin pudding as about a 7.5/10 – good in my book, but not so absolutely stellar that I’d want to eat it more than once a week. If you’re looking for a quick, easy and nutritious plant-based breakfast, snack, or dessert, then I highly suggest making it. If you’re into overnight oats and smoothies, this recipe is like a blend – ha ha, get it – of both, so definitely give it a try! Once again, you can find the full recipe here. Happy Halloween and here’s to healthy eating!

We are a non-profit organization started by a group of student athletes based in the Seattle area. We created this blog to share their stories and tips for other athletes with the hopes of encouraging a community of resilience: we support our fellow athletes in banding together through tough times.